Enjoy some of the best views in Ireland

This ride is available daily with times to be prearranged with the Bespoke Equestrian Ireland team.

Day 1 – Flexible starting time: You will come to the centre for an assessment, have some refreshments, select a suitable horse and go riding in the North Antrim Hills with weather permitting, views over almost all of Northern Ireland, parts of Southern Ireland and across the sea to Scotland. The ride will last approximately 5/6 hours.

Day 2 – Start time approx. 8 30am (can be flexible): Begin the day at the coastal village of Ballintoy where you will spend approximately 6 / 7 hours riding on the North Coast and taking in the renowned beach of Whitepark Bay, lunch at the Red Door Cottage Tea Room and finishing the day by riding in the hills overlooking the quaint seaside village of Ballintoy, the Game of Thrones film locations of Ballintoy Harbour and Larrybane beside the famous Carrick a Rede rope bridge while looking out over the sea to Rathlin Island, the Mull of Kintyre in Scotland and the Western Isles of Scotland.

This ride is all off road

This two day riding adventure begins at the McKinley family farm located in the beautiful County Antrim countryside. This magnificent hilltop farm is surrounded by 1,000 acres of rolling hills, lush with grass and dotted with white, fluffy sheep. As you make your way up the long, scenic driveway, it soon becomes clear, this isn’t any ordinary “Irish Farm”.

On arrival Mr. McKinley, members of the Bespoke Equestrian Ireland (BEI) team an “Lanna” the resident farm dog will greet you with a warm, genuine welcome! Before heading to the stables, we’ll make our way to the converted loft above to enjoy fresh-baked scones and tea, then we will take a stable tour to meet the team of horses and, if you wish, you can assist with grooming and tacking. After selecting a horse and a riding assessment you will hit the trail, riding out into the wilderness of the North Antrim Hills, we will make your way across verdant pasturelands, crossing a stream or two before climbing up onto the moorland above the farm to take in a sweeping 5-county view of Northern Ireland and as far away as counties Donegal, Derry, Tyrone and Fermanagh!

As we ride higher and further out into the Antrim Hills to the summit called “Croaghan” we will have a 360-degree panoramic view of all of these locations opening before us.

From Croaghan, take a long look out over the Glens of Antrim, looking north to Scotland and Scotland’s Ayrshire Coast, Mull of Kintyre, Scottish Highlands and the Western Isles. Also looking over to Rathlin Island, an island off the coast of County Antrim and the northernmost point in Northern Ireland. Additionally, take in County Donegal’s Inishowen & Malin Head—the northernmost point in Ireland. Western views look out over the River Bann to the Sperrin Mountains and south to County Down’s Mourne Mountains and to Slieve Beagh in County Monaghan in Southern Ireland.

As the team descends Croaghan, making their way over the trails and hills, one thing will become clear–the aura of the surrounding lands are serene and tranquil, mystical and awe-inspiring. 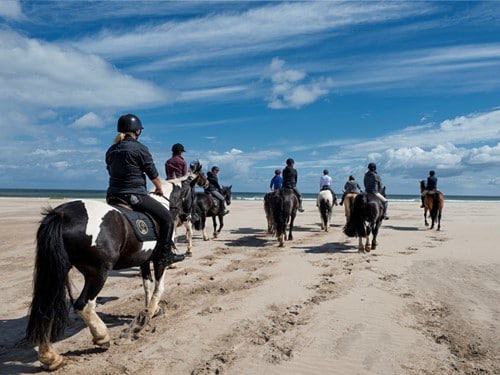 We will transport the horses 10 miles to Ballintoy on the coast, where after tacking up we will follow an old off- road track with splendid views of the coast, to the breath-taking white sand beach of Whitepark Bay, a 3-mile long beach on the famous Causeway Coastal Route. Whitepark Bay is a beautiful stretch of pristine beach located on Co. Antrim’s North Coast near the picturesque village of Ballintoy. With a beach so pure it shines for miles (on even the cloudiest of days) it’s the perfect backdrop for a refreshing trot, canter or gallop!

We’ll take our time playing on the beach & in the ocean before cantering over the smooth sands! If we’re lucky the famous “Sunbathing Cattle” will be on the beach basking in the sun’s warmth.

You will spend your time romping and capering along the 3 mile stretch of pristine, resplendent white sand and explore the rolling sand dunes of the area below the backdrop of the rugged surrounding cliff faces which were once home to some of the earliest human settlers in Ireland. Savour the taste of the tantalising sea air, feel the blustering and energising wind on your face and the radiant rays of the Irish sunshine on your back on this invigorating ride.

Afterwards, we’ll make our way over sandy dunes and across lush farmlands for lunch at the Red Door Cottage Tea Room, owned by Nigel & Joanne McGarrity and family. This traditional Irish tearoom sits in an idyllic rural area surrounded by grazing cows & sheep on one side and the mighty Atlantic on the other. Enjoy a pint, glass of wine or a cup of tea/coffee on the outdoor patio or head inside to dine. Expect good, straightforward locally sourced main dishes such as seafood chowder or Irish stew, terrific sandwiches and, quite literally, the best homemade desserts in Ireland! The Red Door Cottage is the perfect place to rest and recharge before continuing our ride of exploration on private farmland in the hills above the picturesque village of Ballintoy.

We will look out over Ballintoy Harbour which was mainly associated with salmon fishing. In its heyday, cartloads of salmon made their way round hilly roads to catch the train at Ballycastle and onwards to Belfast. Game of Thrones fans will recognize Ballintoy Harbour as the setting for the Iron Islands and Lordsport in the Isle of Pyke. Like most places along the North Coast, the views from these hills are spectacular and offer some amazing photo opportunities. We look down on Ballintoy’s most distinctive site, the white Ballintoy Parish Church, perched on a hill overlooking the vast Atlantic.

Ballintoy Parish Church was built in 1813, in replacement of the original church built in the early 17th century. It is one of the most scenic churches in the country and is often pictured with the stunning view of Rathlin Island in the background. Many notable landed families are buried in the church’s cemetery including The Stewarts of Ballintoy, Downing Fullerton and members of the Stewart-Moore family.

We will now make our way towards the final destination of our journey and as we ride, we will be looking down on to the cliffs surrounding one of Northern Ireland’s most popular tourist attractions, the Carrick-a-Rede Rope bridge. From here we will take in the vista of this spectacular coastline hugging the wild Atlantic Ocean, looking out over the sea to Rathlin Island, the Mull of Kintyre in Scotland and the Western Isles of Scotland before finally stopping and saying farewell to the horses and team after a full day of off-road riding.

Locations where we ride:

What’s Included in the Trip:

This ride is available to start on the date of your choice at the following rates: